Robert I of Scotland, the warrior King of Scotland and more popularly known as Robert the Bruce, reigned as King from 1306 to 1329 and led Scotland during the first war of Scottish independence. As an American, you’re led to believe what Mel Gibson tells you about Robert The Bruce, that he was a traitor to William Wallace “Braveheart” and that he was an all around jerk. However, that couldn’t be further from the truth (hmmm, Hollywood taking creative liberties in historical story telling, imagine that). In actuality, it was Robert the Bruce, a national hero in Scotland to this day, who was the real Braveheart. Upon his death, in accordance with his final wishes, his heart was removed before burial to be carried into battle in the crusades and ultimately to be buried in the Holy Sepulchre in Jerusalem. Sir James Douglas, aka the Black Douglas carried his friend’s heart in a silver around his neck into battle. At one point the heart was thrown at the advancing enemy with Douglas shouting “now pass thou onward before us, as thou wast wont, and I will follow thee or die.” Unfortunately, Douglas died and the Heart of the Bruce never made it to a peaceful deposit in the Holy Land, instead both were returned to Scotland with the heart resting today at Melrose Abbey in Scotland.

So why in the world am I telling you all this on a beer blog? Probably like you, I had no idea who this guy was until my cousin was doing some genealogy about 6-7 years ago. Low and behold, we discovered that Robert the Bruce King of Scots was our 20th great grandfather. Me royalty? Sadly no… Even though Prince William and Prince Harry and even Queen Elizabeth are, technically speaking, my cousins, there’s been no royal wedding invitations and no summering at Balmoral Castle. So now to the why I told you all of this. Shortly after learning about our badass newly discovered relative I found myself sitting with a buddy at BJ’s Restaurant and Brewhouse enjoying a beer. In those days, I had heard of craft beer, but had never really sought it out. I was a Miller lite, Bud Lite or (gasp) Coors Lite kind of guy. So as we’re sitting there ordering our beers I noticed “Robert the Bruce Scottish Style Ale” on the list of beers. A beer named after my 20th great grandfather? I had to try it out. I can’t honestly say that this was the first craft beer I ever had, but it was one of the first and certainly one of my more memorable discoveries. Maybe I’m a bit biased and think it’s pretty darn cool to pull this beer out of the fridge, but I really do like it. 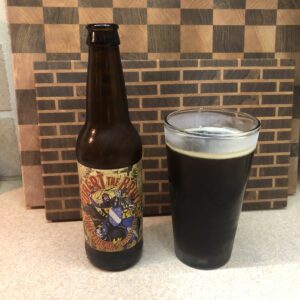 So what’s it like? Well, I really love this beer. It pours dark brown, almost black with slight notes of fruity booziness. Its medium bodied, not overly hoppy and definitely finishes smooth. It has a great dynamic taste and I feel you pick up different notes with every sip. I highly recommend this beer and regularly have a few in my fridge.