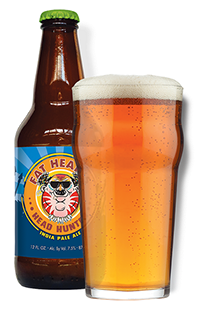 I’m starting to learn of the perks of being a part of 3 Guys 6 Beers, and I’m liking said perks. At school, my 7 year old son sits next to the son of my childhood friend/neighbor and occasional boat racing collaborator/teammate. We had wanted to get together for dinner for a while, and it finally came to fruition this past Saturday. When we greeted them at the door, my eyes opened and a smile grew on my face when I saw a beautiful site, a growler with the Fat Head’s logo on it. Inside the beautiful brown glass jug was Fat Head’s Head Hunter IPA.

Admittedly, IPA’s aren’t my go to, but I tell you what, I really liked Head Hunter! In fact, I think it’s likely the best IPA, in my opinion, that I’ve had thus far. Now for its part, Head Hunter is no slouch. Fat Head’s website shows that they’ve collected multiple awards for Head Hunter from the World Beer Cup, National IPA Challenge (Grand Champion 2010 and 2012) and the Great American Beer Festival. So I guess if I’ve staked my claim for favorite IPA thus far, at least I’ve chosen one that has a bit of a pedigree.

Head Hunter pours a golden yellow in color and you’re hit with the customary hoppy note of an IPA and tastes a bit smoother than your typical IPA. You get the hoppy taste, but also with a twist of pine and a little citrusy taste. Fat Head’s website mentions pineapple too, but I didn’t notice that, maybe I’ll have to get another glass. I don’t know that I’d be able to drink Head Hunter, or any IPA for that matter, all day, but next time I’m choosing an IPA, I think it’ll be Head Hunter. So whether you’re and IPA only kind of guy (or gal) or don’t normally tread in those waters, I think you should give it a shot. Thank you Jesse for bringing it over! I’m going to have to do some thinking on what I’ll bring to top that one the next time we get together.