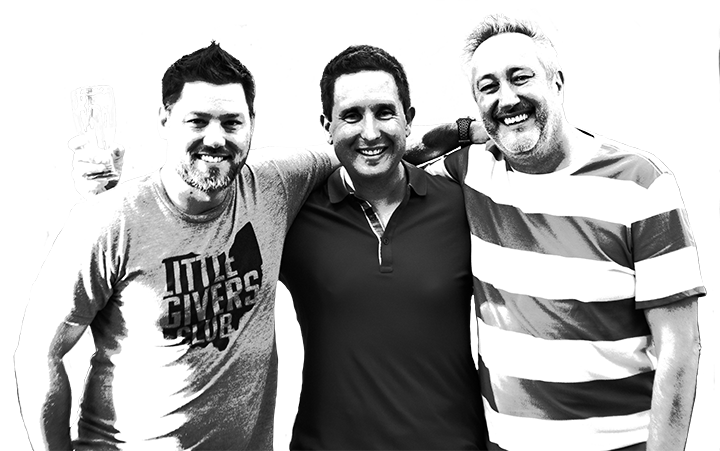 Look. The fact the three of us love craft beer should be no surprise by now. We do. We really do.

Craft beer, as much as we love it, is a small part of what the three of us are about. We’re doers. We love doing things and getting things done. Not just in our work lives, but in our home lives and our community lives as well.

We’re volunteers. We’re members of boards of directors. We’re on city committees. We’re entrepreneurs. We’re businessmen. We do these things because we want to help effect change. But most importantly, because we love this place we live. Not just Ohio, but “this” place. The planet Earth. You know the thing that’s under our feet right now. 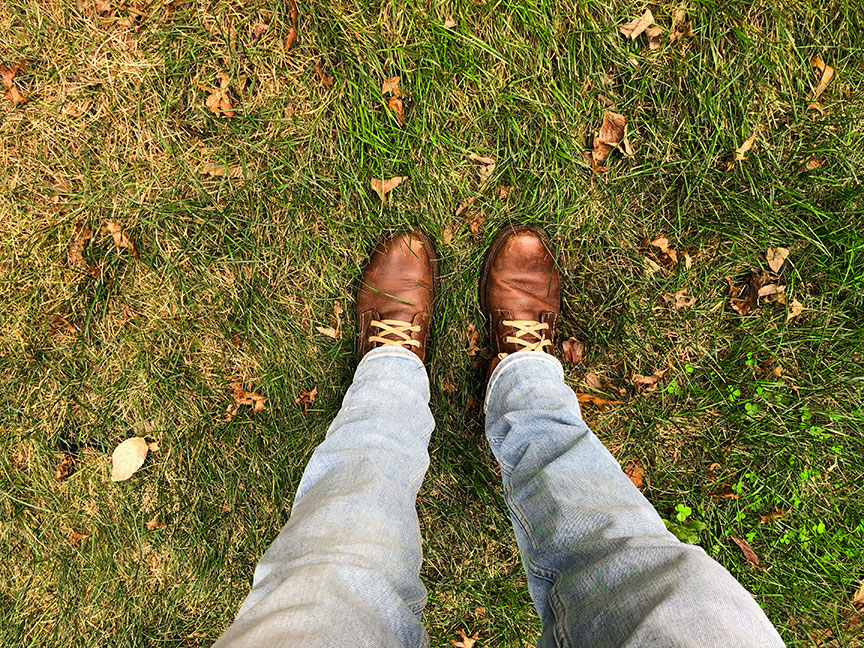 While at the 720 Market, a local open-air market, this past summer Christina and I stopped and talked with representatives from our tri-county recycling center. They were showing us examples of what can and cannot be recycled and our minds were blown, but not in a good way. Because we thought we were doing things right. But we were doing things all wrong. Things we thought were recyclable… totally not. We came home and went through our bin… according to the information we got that afternoon, almost half of what was in our bin was wrong and this included glass. 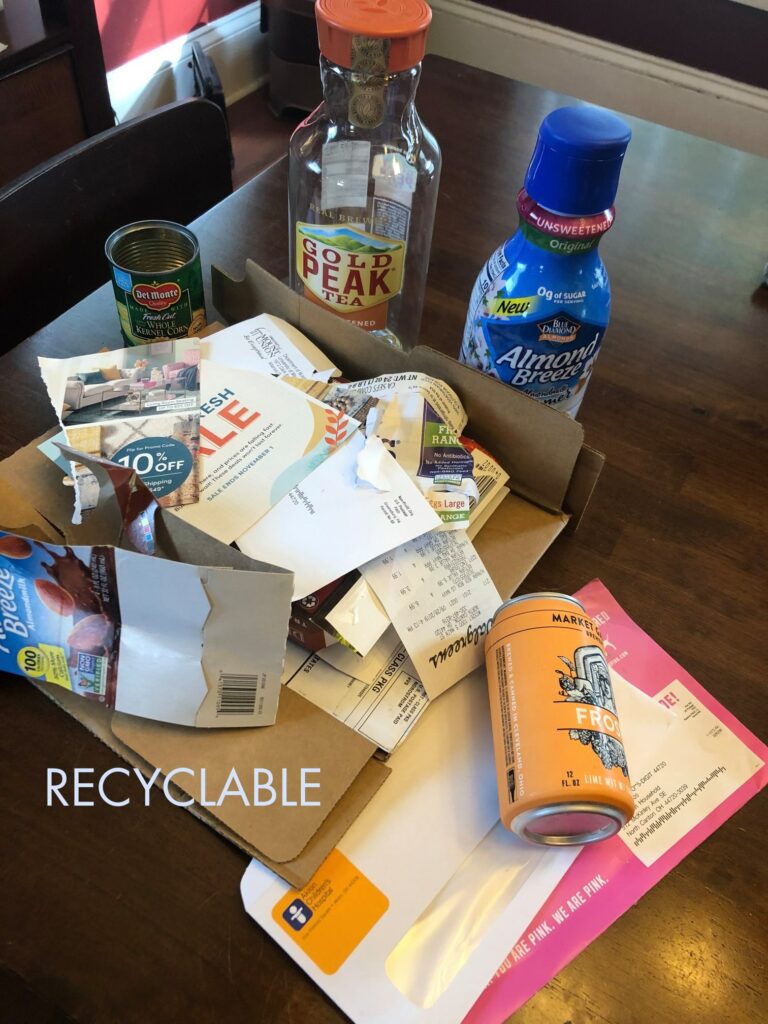 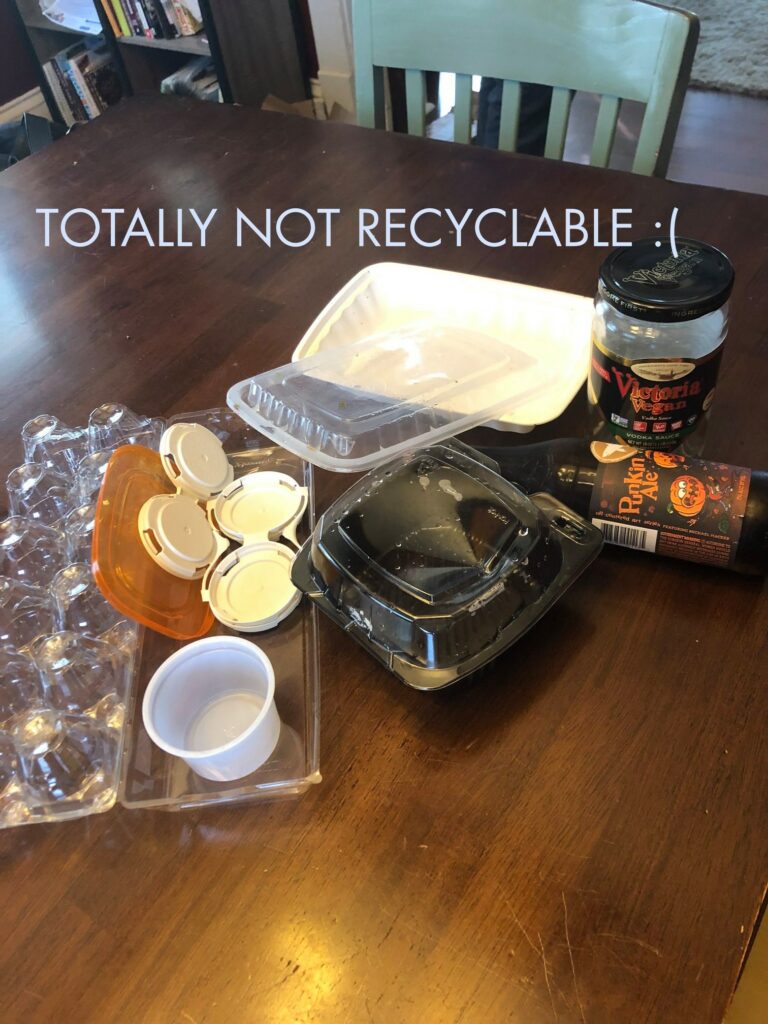 Did you know many municipalities no longer accept glass to recycle? You read right. The cost to recycle glass has risen, while the demand has fallen.

On top of that, many of the plastic items that are marked with correct numbers to be recycled are not recycled either. We were told that the only plastic that should go in our recycle bins are bottles and jugs, and they have to have a shoulder and a neck to be recycled. The fact that China has stopped purchasing recyclable plastic from the United States has really made a bad situation even worse.

Did you know if your recycle bin has 30% or more of unrecyclable items in it, it’s considered “contaminated?” Yup… right to the landfill it goes along with your well-intended recycling efforts. The images above show what was in our bin at the time. Had we continued with how we were going the bin would have gone to the landfill.

You’re probably doing it wrong too. The real rub of this whole thing is, it’s more than likely not your fault because you just don’t know. You haven’t been given accurate information.

We’re all guilty of putting the wrong thing in the recycle bin (the author of this post certainly is). But the truth of the matter is it’s because we just don’t know. I’ll be honest and say that in our household we’ve been guilty of wish-cycling too. Wish-cycling is placing things in the recycling bin because you think it *might* be accepted and it just feels better to think that more of the waste we’re generating isn’t going to a landfill.

Communication and education are key to the success of any recycling initiative. When communication is nonexistent, as in our community, we have no way of knowing if we’re recycling correctly. There are three players in the game in our corner of the world and none do an acceptable job of informing the public.

We left the table at the market feeling defeated, conflicted and just plain old pissed off. We’re trying to do the right thing by recycling, but in reality I’m guessing most of the bins we’ve sent away ended up in 30% land, a.k.a. the landfill. Also not acceptable.

But wait a minute. Wait just one minute. I said that most municipalities are not accepting glass. That’s true. Now you’re saying “But uh… beer comes in glass bottles. WTF? What do we do now? Do we stop drinking beer in bottles because we can’t recycle it?”

The answer to that is a resounding NO!

Drink and enjoy that bottled beer. Hell yes. But instead of assuming the bottle will be recycled, know it will be recycled (or not be recycled) and dispose of it accordingly. That’s a big thing right there. Knowing.

Did you know that the plastic pack rings (known as hi-cones, yokes or handle systems) that hold our craft beer cans together often times are not accepted for recycle? Nope. They’re not. Even though one of the major players in the “handle” industry, PakTech, says that their handles are 100% recyclable, our local recycle district will not accept them. Where’s the logic in this? Maybe it’s these companies that are leading in the field who need to educate those that collect their products? Education is another huge aspect of this problem or should I say the lack of. 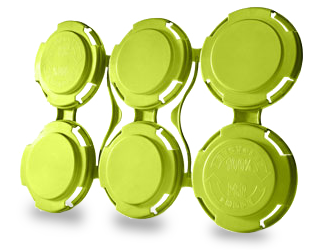 The recycling situation in its current state is ridiculous. And as mentioned, pissing me right off. I thought to myself there has to be something we, the three of us, can do. We have to tell people just how jacked up this is. That’s another big thing. Communication.

What does all this mean? I’m not really sure. But what I do know is we all need to keep recycling. Trying is better than not trying. Call or check the websites of your trash company, your city and your local recycle center and get the information you need to be socially conscious. Be aware though, you could make three different phone calls and get three totally different answers and different answers if you call the same office twice. It’s maddening. Long story short… do your best. Investigate and ask questions.

We, the 3 Guys, are very, very small people in a very big world with a giant mess. But, we have to try something. We’ll be launching an awareness campaign aimed at spreading knowledge, education and communication about recycling and the three R’s. Reduce. Reuse. Recycle. For instance, I was fortunate enough to receive a Drink Tank Growler as a gift this past Christmas. I’ll be refilling that with my favorite local brews and reusing that bad boy often. By doing this one thing… I’ll be taking care of two of the R’s. Reduce and reuse. 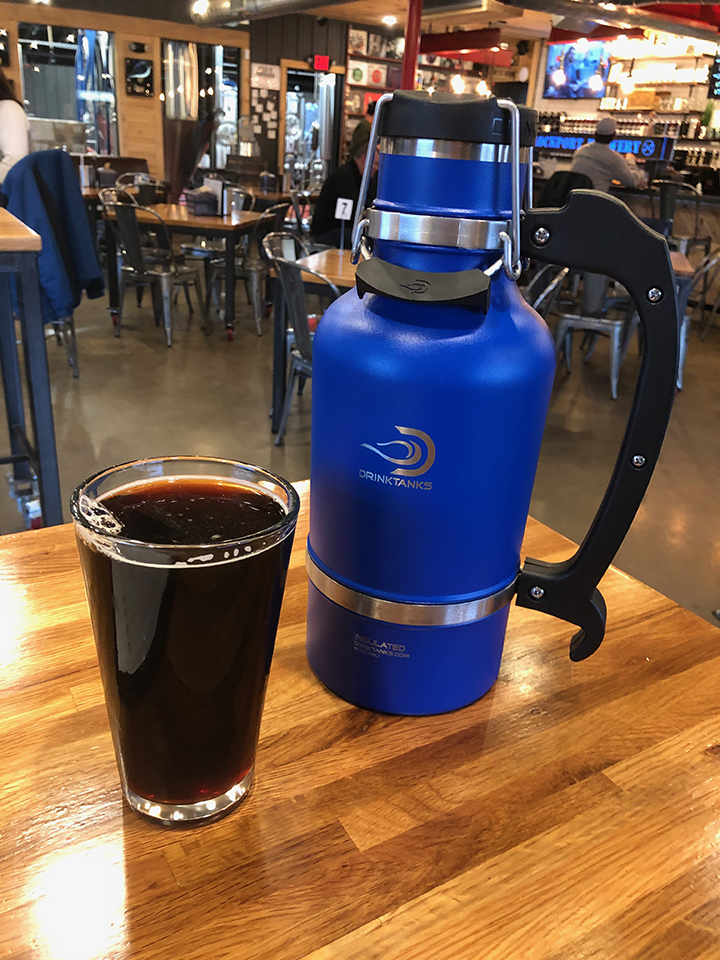 We know and understand that things will differ from place to place, that’s why it’s important to get information and answers where you live. Be warned, this information changes frequently. This problem isn’t unique to us by any means, but it is a burden for all of us.

Join us and become a Socially Conscious Drinker too. CHEERS! 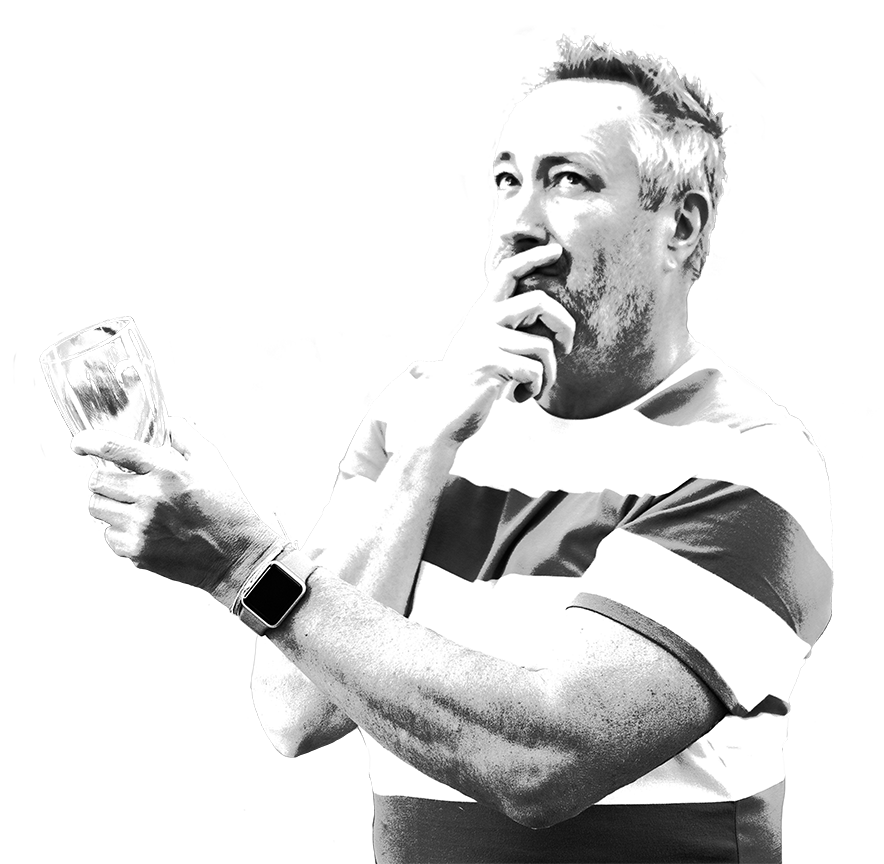 UPDATES SINCE WRITING THIS POST (I’ll keep adding to this as new information is received):
• Cardboard boxes headed for the recycle bin must be broken down and flattened
• Glass (in our community) is still accepted. We’re told it’s being stockpiled in case a market opens for recycling it.