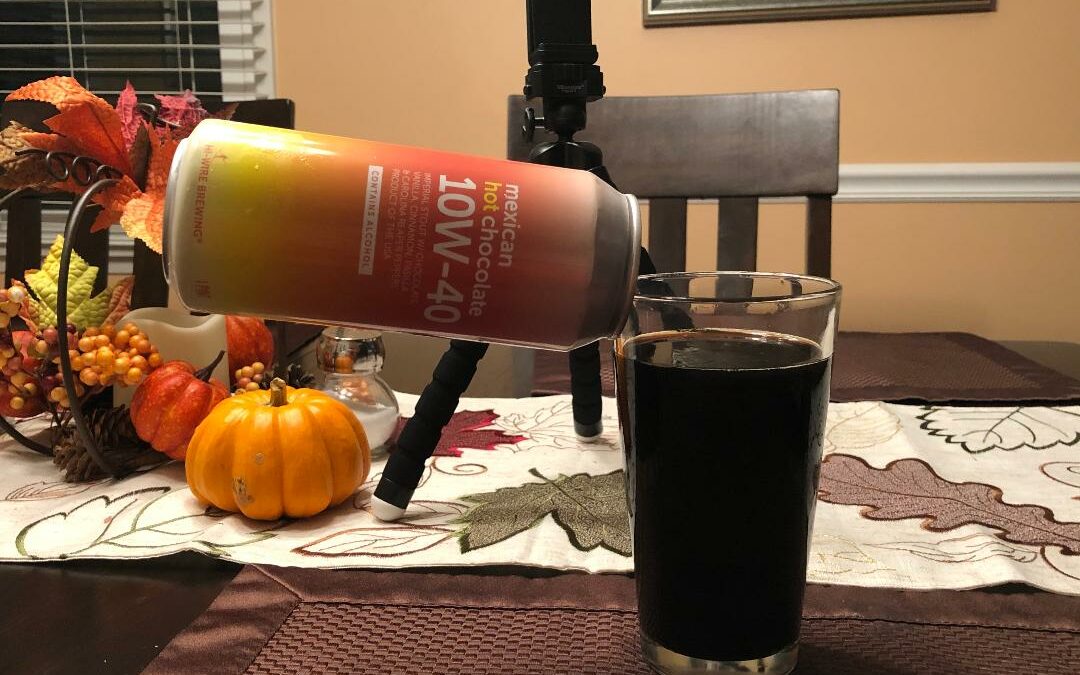 Well, this was an interesting one. This was the first, true live video review I’ve ever done, this was recorded live via Facebook Live (here). I’ll start by saying that I LOVE the Hi-Wire Pala Santo 10W-40, in fact, I may head to Erik’s and grab one to help erase the memory of this one.

The Mexican Hot Chocolate pours black, like many other stouts, but the similarities ends there. When I chose it, memories of the other 10W-40 were still fresh in my head, and seeing “hot chocolate” on the can made me this of snow covered days and a warm cup of Swiss Miss hot chocolate, so I quickly grabbed it… I should’ve read the can a little more carefully. The branding and naming isn’t off on this beer, my interpretation of it was. In actuality, if I had read the can in more detail, I would’ve realized what I was getting myself in to. To clarify, I love to make my chili hot, I love hot salsa on my chips and tacos, and if I’m having buffalo wings, I got towards the top (but not at the top) of the Scoville Scale of hotness. 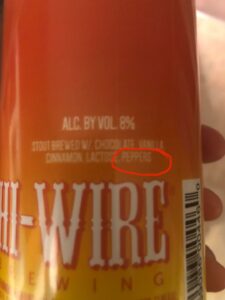 So while I was thinking that this would be a little more “Swiss Miss” hot chocolate, I missed the keywords on the can that would point me more towards “Atomic wings at Quaker Steak and Lube.” Those keywords were “Mexican,” and “Carolina Reaper Peppers.” Yes, CAROLINA REAPER PEPPERS! Lesson learned. For those that don’t know what the Carolina Reaper is, in 2013, Guinness World Records listed it as the hottest chili pepper in the world! The can says “contains alcohol,” the can should say “contains hot-ass peppers!!!”

On to the review. Once my interpretation of the can was fixed (after the fact), this is exactly what they say it is, a hot chocolate stout. I’ve been impressed with the products that come out of Hi-Wire Brewing, and this is no exception. When you try this, it starts smooth, you can taste the chocolate and other awesome flavors, but then the peppers kick in. For those that watched the video review, you probably saw the look of confusion on my face as I’m still thinking “Swiss Miss” and not “Carolina Reaper.” After several sips, and approximately half the can, each successive swallow grew greater in intensity. In the end, I couldn’t finish it. I’m glad I tried it, I didn’t hate it, in fact I respect it, but this one just isn’t for me. I have regretfully changed the score given on camera (a 3) to a 2, simply based on the intensity that builds, and the fact that I couldn’t finish it. Would I have it again? Likely, no. I’ll Stick with the Palo Santo 10W-40, my highest rated beer as of now. The Mexican Hot Chocolate 10W-40 is an interesting beer, but I’ll tell you to be ware, it packs a punch!