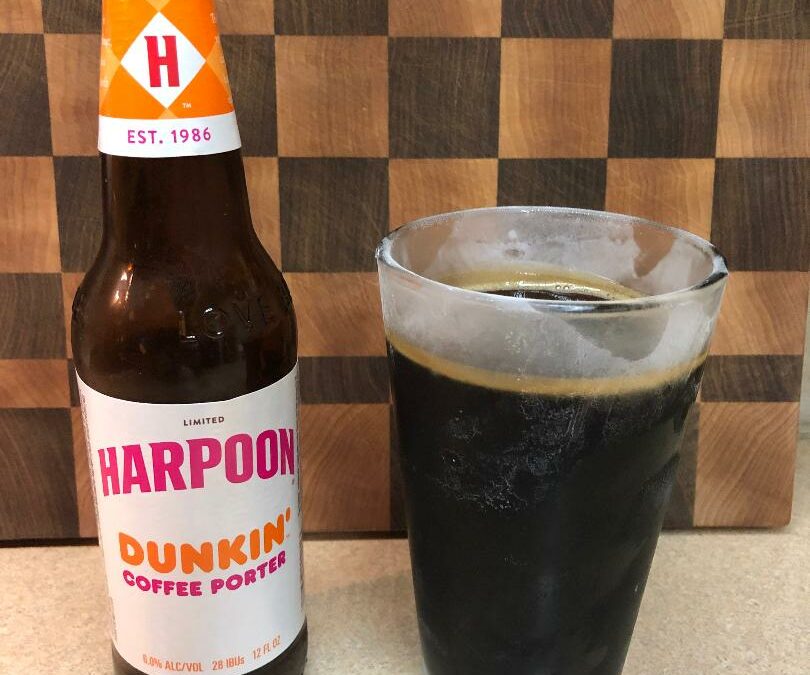 America runs of Dunkin’ and after 5pm, America runs on Dunkin’ Coffee Porter from Harpoon Brewery? Well, I mean it could, right? As a morning drinker of coffee and a lover of dark beers, a coffee porter or stout always has my attention when roaming the beer isles at the grocery store or at the beer store. I can’t say that I’m one of those people lined up at the Dunkin’ Donuts drive thru each morning waiting for my morning caffeine, I’m more of a make my coffee at home kind of guy, but like a moth to light, or a child to a shiny piece of jewelry, I was drawn to the brightly colored label and the intrigue of a brewery making a coffee beer in conjunction with Dunkin’ Donuts piqued my attention. Is it Dunkin’ Donuts or simply Dunkin’? I would’ve voted for “the coffee shop formerly known as Dunkin’ Donuts” but that’s just me. Whichever way you’d have it, let’s talk about the Dunkin’ Coffee Porter from Harpoon Brewery!

Generally speaking, I’m drawn to the darker beers. Far from my “cup of tea” in my younger, college days, is my go to now. Through 3 Guys 6 Beers, I’ve had the opportunity to try far more beers than I ever thought possible, and that brings us to the brightly labeled Dunkin’ Coffee Porter, a beer I wouldn’t have ever imagined years ago. Dunkin’ Coffee Porter poured out black with a rather small caramel colored head that grew in size between taking the picture and sitting down to enjoy it. As described on the bottle, Dunkin’ Coffee Porter is a “classic porter” with Dunkin’ coffee, and that’s exactly what you get. You get a little hint of chocolate upon opening/pouring, and Harpoon says espresso, and although I didn’t get smacked in the nostrils with that, I would imagine that it’s there too. One of the things that I seek in a beer is drinkability, and this has it. I also look for smoothness and this definitely has it as well. Although not overwhelming with super bold tastes, you do get a little bit of coffee and chocolate flavors.

In the end, I do like the Dunkin’ Coffee Porter, but I don’t know that it met my complete expectations. With the coming together of a great brewery and an international coffee powerhouse, I did expect a little more in the flavor department. I felt that the flavor was there, but that it was only partially unlocked so to speak. I felt it could be bolder and more dynamic. I do however think that it tasted much better, and probably less burned than if the label was green and it came from Seattle. After I review a beer I always ask myself the same thing, would I have another? The answer, yes. Do I think you should try it? Yes, and I hope you do. Tell me what YOU think!