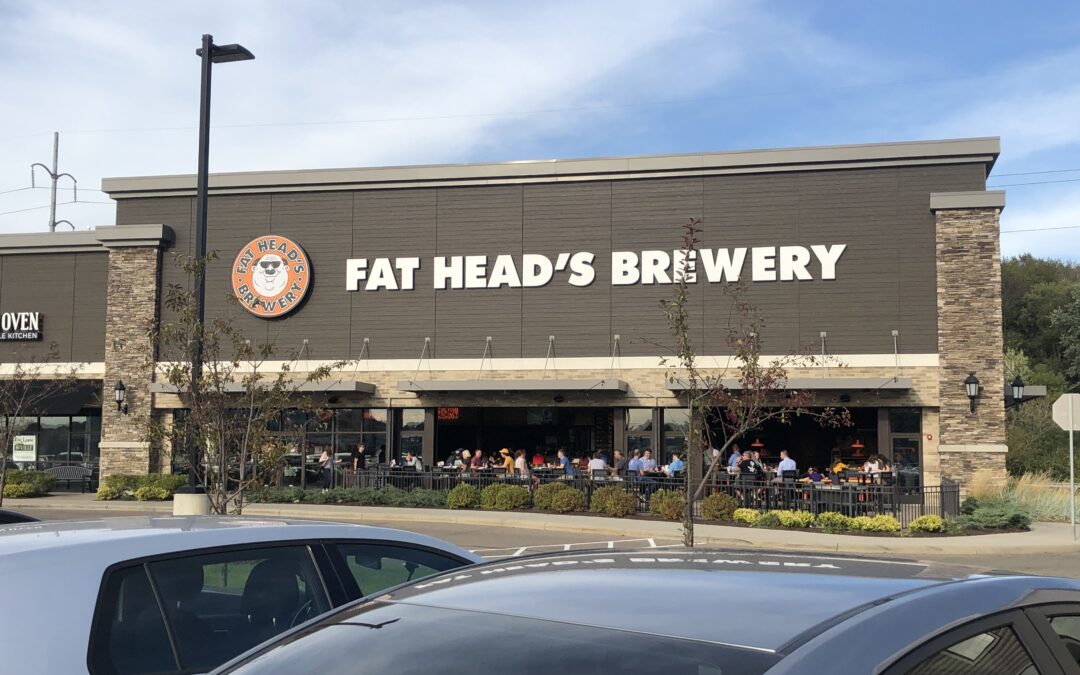 Fat Head’s, with their mainstay beers such as Bumble Berry Honey Blueberry Ale, Head Hunter IPA and award winners Midnight Moonlight, Alpenglow, it’s safe to say, you’ve heard of Fat Head’s. With origins in Pittsburgh and brewing operations outside of Cleveland in Middleburgh Heights Ohio, they have four locations where you can come in, hang out and have some beer and a bite to eat. On Friday September 27, 2019 my wife, kids and I joined some friends for dinner at the Canton location.

This was my second visit to the Canton location, the first time that I had food. The atmosphere was great, we were seated opposite the brewing area near the large doors that open up to the patio. The space is open and airy, and on this gorgeous September night, it was the near perfect spot. For the first half of our visit, the large doors remained open to the outside, but as the sun got lower and lower in the sky, they closed the doors and lowered some blinds so those inside could eat and drink without the aid of sunglasses. 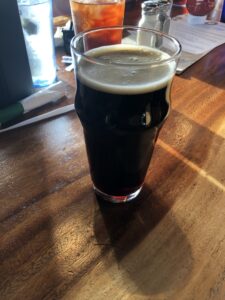 I decided to try out the Up in Smoke Imperial Smoked Porter on the beer menu that seemed by my own, maybe erroneous perception to be IPA heavy, but nonetheless, this looked good. As the beer came out we were finishing up deciding what to eat. I was slightly disappointed that my burger of choice couldn’t be made a lettuce wrap. As someone who tries to curb his carb intake, I wanted to save the carbs for beer. Realizing that that wouldn’t be an option tonight, I looked to my wife and said “I guess its going to be a carb cheat night.” Then, throwing caution to the wind, I moved away from my previously chosen bacon cheeseburger and went the whole nine yards with Fat Head’s Triple Bypass Burger. The Triple Bypass Burger comes with your typical burger patty, but adds on cheddar cheese, “lots of bacon,” a sunny-side-up egg, cracked black pepper, lettuce, tomato, red onion and rosemary mayo. On the side was a heaping pile of fries. I ordered mine sans tomato, onion and mayo, and despite coming with mayo on it, I loved it. My wife ordered the classic Rueben and enjoyed it, as did our son and daughter who ordered off the kids menu. 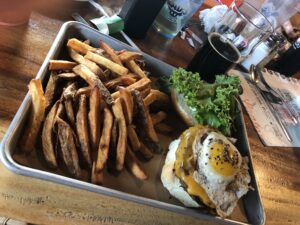 I had previously reviewed the Up in Smoke Imperial Smoked Porter, here are my thoughts on that; Generally liking darker beers, this one was good, but for me, it wasn’t great. It has a nice and enticing smooth feel to it, but the taste felt muted to me (if that’s even a description I can use). It was good, but it felt as though the rest of the taste was in there, it just needed to be unlocked. Would I have it again, yeah, I’d give it another shot, but it won’t be a go to for me.

Overall impressions of Fat Head’s Canton? The atmosphere was perfect, the food was great and the beer was good as was the service. Would I go back to Fat Head’s in Canton, you bet.